Among the many things that my daddy liked to give us money for—besides washing his feet in the collard pot—was the summer fly reduction effort. If you were poor white folks in the middle of the country in the mid-seventies, you didn’t want any more insects around if you could help it, and not running the air conditioner to save money meant the windows had to be open. Energy prices were through the roof, the compact car craze was on the rise, and people were doing anything to save a few pennies. We remembered early-morning gas lines stretching for miles due to the gas crunch.

We were living on a shoestring budget; our family of five shared a seventy-foot trailer on a wooded lot. This lot was our project on the weekends. I can remember Daddy crackin’ the whip as we hauled dirt, branches, rocks, and twigs to the back of the lot. The pests were terrible. Seems like the only kind of insect we didn’t know about was the locust. I always thought locusts were some rare, exotic insect that only afflicted the Egyptians when Moses was mad. I can remember Charlton Heston warning Yul Brenner to free his people or else the locusts would come and get ’em.

I guess my daddy was a modern-day pharaoh in his own right, because he sure caused the pests to afflict us. This wooded “paradise” came with the miserable equivalent of pestilence. We had mayflies, horseflies, dragonflies, ladybugs, stink bugs, brown ticks, deer ticks, crickets, water bugs, and mosquitoes the size of walnuts. Combine the energy conservation with pharaoh’s army of insects and you have yourself a problem. Naturally, we had to do something about it.

That’s where my daddy’s entrepreneurial skills kicked in again and he decided that he was going to pay us kids a nickel for every fly we killed. The only downside to this capital venture was that there were only two flyswatters in the house, and that meant one of us was doomed with the rolled-up newspaper. Anyone who has ever killed flies with a swatter and a paper knows the difference; a swatter is a far superior tool. I don’t know why I was doomed to be the unlucky one, but I tried to even the playing field a little bit.

Opening the windows in the summer sometimes meant flies died on the windowsills. I suppose it’s a nice quiet place for a fly to die—a room with a view, so to speak. One day, the window sill was loaded with dead flies. So I proceeded to roll them onto a paper towel hearse that my daddy had given me. Careful not to be seen, I whistled and pretended to be looking around the room when someone came in to inspect my work. At one point, I could hear my little brother, showing his stash to Daddy before we were done; he couldn’t wait to collect his nickels. Mark walked up to my daddy, who was sitting at the kitchen table watching TV as we slaughtered the enemy.

“Hey, Daddy! Look at this!” Mark exclaimed. “These two right here are stuck together! What’ll I get for this one?” he asked innocently.

A devilish snicker came from my daddy as he said dryly, “Oh, three or four thousand in a couple of days!” He laughed out loud at his own joke. My little brother was none the wiser and went back to his quarry with a befuddled look on his face, mixed with the expectation that he would reap great wealth from this venture.

Finally, when all the visible flies were gone, we went to the table to sort our flies. My Daddy began counting Wendy’s first, and as he rolled each fly to the side with his retractable ballpoint pen, he counted, “Now that’s one, 5 cent, 2 is 10, 3 is 15” and so on. He pushed the flies aside and wrote her salary on the paper towel. “Who’s next?” he asked.

I jumped up to put the paper towel in front of him. I watched with dollars signs in my eyes. But it didn’t take long for Daddy the pharaoh to catch on.

“Seven, eight, nine . . . hey, wait a minute here . . .” My heart sunk because I knew I was busted. “What is this?” he boomed in his country bass voice. “Are you trying to pull a fast one on me, girl? You little shyster! What’s wrong with this fly here?”

I looked at him sheepishly, aware of the lump in my throat. One did not try to fool my daddy. I’m certain I gulped both from embarrassment and from concern that the egg turner was going to come out of the drawer and make a date with my tail. Daddy had noticed the difference in the flies. He’d seen that the flies on the windowsill were crispy instead of smushed like the ones that had been swatted.

“I know where you got these from!” he said with a smirk on his face. It never occurred to me that he would inspect the flies so closely. I remember thinking to myself that I should have smushed the flies before I took them to him.

“Now just for being a shyster,” he said to me, “I’m going to deduct a nickel for every windowsill fly I find.”

My brother and sister were laughing at my comeuppance. I can still hear Daddy’s snickers as he carefully sorted the flies. By the time it was all over, I ended up with only twenty cents. But at least I can say that I was conserving energy and cleaning up the environment all at the same time.

Official Press Release is out

BOOK Signing: Join us Nov 9th for a Book Signing

BOOK EVENT: Nov 9th at 6 PM: at Turnage Theatre -Arts of the Pamlico 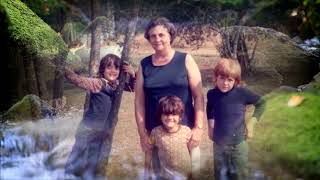 Official Press Release is out

Give the Possum Track this Christmas